The story of The “Goose”…. My little miracle.

The story of The “Goose”…. My little miracle.

So, Clayton asked me to write a few blogs.  Being that I am not a millennial I had to ask, “What’s a blog?”  This question was met with a blank stare, a “wow” and a dictionary definition that more or less told me it was like a diary entry or a really long post.  Lol.  So, here we go…my first attempt.

Sorry if this gets too personal but those of you who know me well know that I am an open book.  I think it’s important to really “know” your agent. They should be a friend, a family member.  No secrets here….

Today I am going to talk about the most important thing in my life, my baby girl, my best friend, my little Lana (aka “Goose”).

Back in 2002, I was diagnosed with a very rare medical condition (lucky me) that I was told would probably render me sterile and the chances of me ever becoming a mom were slim to none.  I was quite young so the seriousness of this diagnosis didn’t really affect me too badly at the time.  As I got older I conditioned myself to be ok with the thought of never having children of my own and I never entertained the idea.

Fast forward to 2011.  I woke up one August morning and I just felt “different”.  I couldn’t really put my finger on it but I was really tired and had recently grown fond of the afternoon nap (which I never needed before).  After a few more days I started noticing some other changes.  I decided to go to the drug store and purchase a pregnancy test even though the thought was absolutely ridiculous.  I took the test and within about 5 seconds I got a positive result.  It was supposed to take 2 minutes so I figured I must have goofed.  So, I took another one and again, 5 seconds in, positive! Unbelievable!  The impossible had happened!

It didn’t take long for me to become obsessed with the idea that I had a little person in my belly.  I spent way too much time online everyday trying to figure out what size she was (it was always a food, a blueberry, grape, orange, cantaloupe), what had developed, what to expect, etc.  I even rented a doppler to keep at home so that I could listen to her heartbeat anytime I wanted.  I never expected to get pregnant so once it happened I become uber paranoid that something bad would happen.  I would spend hours lying on the floor with the doppler to my belly listening to her heartbeat.   I found out months later that the comforting heartbeat I was listening to was actually my own…. I had it in the wrong place all this time.  Lol!  Oops.  Oh well, it made me feel better anyway.

Once we found out we were having a girl it was super easy to decide on a name.  Her father was beyond obsessed with Superman and anyone who is familiar with Smallville knows that Superman’s first girlfriend was Lana.  So, we threw my middle name in there and she became Lana Lynn (very southern I know.  She might have a career in country music, but I hope not.).

The pregnancy was uneventful until I hit the 7 month mark.  I started having some unusual pain and went to see the doctor.  They ran some tests and found out I was having contractions.  They decided to send me to the hospital for a few nights for observation.  Once I got there the contractions started getting more intense.  They gave me a shot to try and expedite her lung development just in case she came early.  They also gave me another shot to try and stop the contractions.  Let me tell you, when you do something to try and stop what nature is trying to do….it is PAINFUL!  I thought I was going to die.  That was probably one of the longest nights of my life.  The nurse finally gave me something to knock me out so I’d stop screaming and scaring the other patients.

Around 5:00am a few nurses and a doctor came into the room, flipped on the light, and started screaming at me to get on my hands and knees and start rocking.  I had no clue what was happening.  They told me they’d been monitoring Lana’s oxygen levels and she was repeatedly cutting off oxygen to her brain for minutes at a time (the cord was around her neck and under her arm pit so we were trying to dislodge it) and if we didn’t fix it she could have permanent brain damage.   Eventually the decision was made to go ahead and take her right then by C-section.

I was terrified!  My mom was out of town on a cruise because she figured if she went 2 months prior to the due date everything would be fine.   My sister lives in Portland, Oregon so she wasn’t able to get there either.  My doctor was in Colorado on a ski trip.  I was going to go it alone.  The doctor on call was on the 3rd day of her 72 hour shift and made it quite clear she wasn’t thrilled to be doing my surgery.  I was scared!

But, a few hours later, I heard the sweetest sound I’d ever heard in my life.  They pulled her from my belly and I heard her cry.  Her lungs were developed, she was breathing, she was going to be ok.  They allowed me to kiss her and then they put her in an incubator and whisked her away to the NICU.  At this point I was still thinking that I was going to be going home with my baby in my arms in a few days….. not so much.

I patiently waited for 12 hours for the epidural to wear off so I could finally get to the NICU and hold my baby.  I was shocked when I saw her, both because of her size and all of the tubes and sensors attached to her.  It was such an ordeal for the nurse just to pick her up and carefully place her in my arms.  We had to be so careful not to pinch or pull any of the many wires.  But, as soon as we locked eyes it was the most incredible love I have ever experienced.  I knew then that God wanted me to be a mother and helped me to do so.

I was only allowed to hold her for minutes at a time and I wasn’t able to feed her because she wasn’t able to handle it yet.  She would aspirate so they had to feed her through a tube in her nose.  It was then that the reality set in that I wouldn’t be able to take my baby home with me.  I wasn’t capable of providing the intensive care that she needed at that time.  As I left the hospital I watched all of the other new moms being wheeled out to their cars with their beautiful babies wrapped in their arms and the huge smiles on their faces.  I couldn’t help but be jealous.  I was leaving empty handed, in a lot of pain and with a new scar across my belly.

The nights at home were the worst!  I had to set my alarm to wake up every 2-3 hours to pump milk so that I’d have milk to bring to her the next morning.  It’s hard enough to wake up through the night when you hear your baby crying for you but to wake up to an alarm and go sit in silence and do what you have to do without your baby with you…..that was really really hard.  I’d call the NICU nurses to check on Lana just to feel like I had some sort of connection.  Most of them were very friendly and would give me just what I needed to be able to sleep through the next 3 hours.

Every morning I’d leave at 5:00am and head back to Atlanta to see my baby.  I’d sit there and hold her for the 5-10 minutes every 2 hours that I was allowed to and the rest of the time I’d just sit and stare at her while she slept.  7:00pm would roll around and I’d have to kiss her goodbye through my tears night after night.  This went on for about 2 weeks and then she was finally able to handle a very tiny bottle.  I would love it when I could hold her and feed her.  I was finally able to do a “normal” mother thing that everyone else got to do immediately.  It made our bond that much stronger.  Everything seemed to be heading in the right direction.

She had to go 5 days without a relapse (where during a feeding she’d decide to just stop breathing for whatever reason and all kinds of alarms would go off and nurses would come flying from all corners into our little space) before I could be allowed to take her home.   I saw this happen once but that was it.  It always seemed to happen during the night when I wasn’t there.  We’d get up to day 3 and I’d be getting all excited and then I’d call to check on her and was told she’d had a relapse and the clock was again reset.  Every time this happened my heard felt like it was breaking into a million pieces.  I just wanted to hold my baby and feel her skin and listen to her breathe.

After the 3rd week and continuous setbacks I decided to just stay with her 24/7 at the hospital (with no bed to sleep in) because she never had these episodes when I fed her.  So, I did just that.  I sat by her side and insisted on doing every feeding no matter how exhausted I was and we did it!  We made it through the 5th day and all we had to do was pass the car seat test.   She had to sit upright in her car seat for 1 hour without having a breathing issue and then we were free to go.  This may have been the longest hour of my life.  Thankfully she slept through it like a champ and we were given the green light.  I was finally that mom that got to leave the hospital with her baby in her arms.  This was day 26.

I finally got her home and then the fear set in.  I actually had to keep this little person alive without all of the wires and sensors.  I had no alarms or beeps to let me know things were ok.  No charts or graphs showing her oxygen levels and her heartbeat…  I didn’t sleep one bit that first night, but we survived.  I never knew it was possible to love someone so much and have so much concern for them so quickly.  We had such a strong bond already and it’s grown stronger every day since then.   Today, she is super healthy, wicked smart, and has the sweetest heart I’ve ever known.  God definitely blessed me with this little miracle and everything I do is for her.  She is my “why”.  My heart.   My Goose. 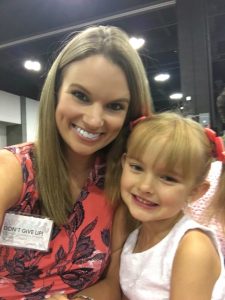